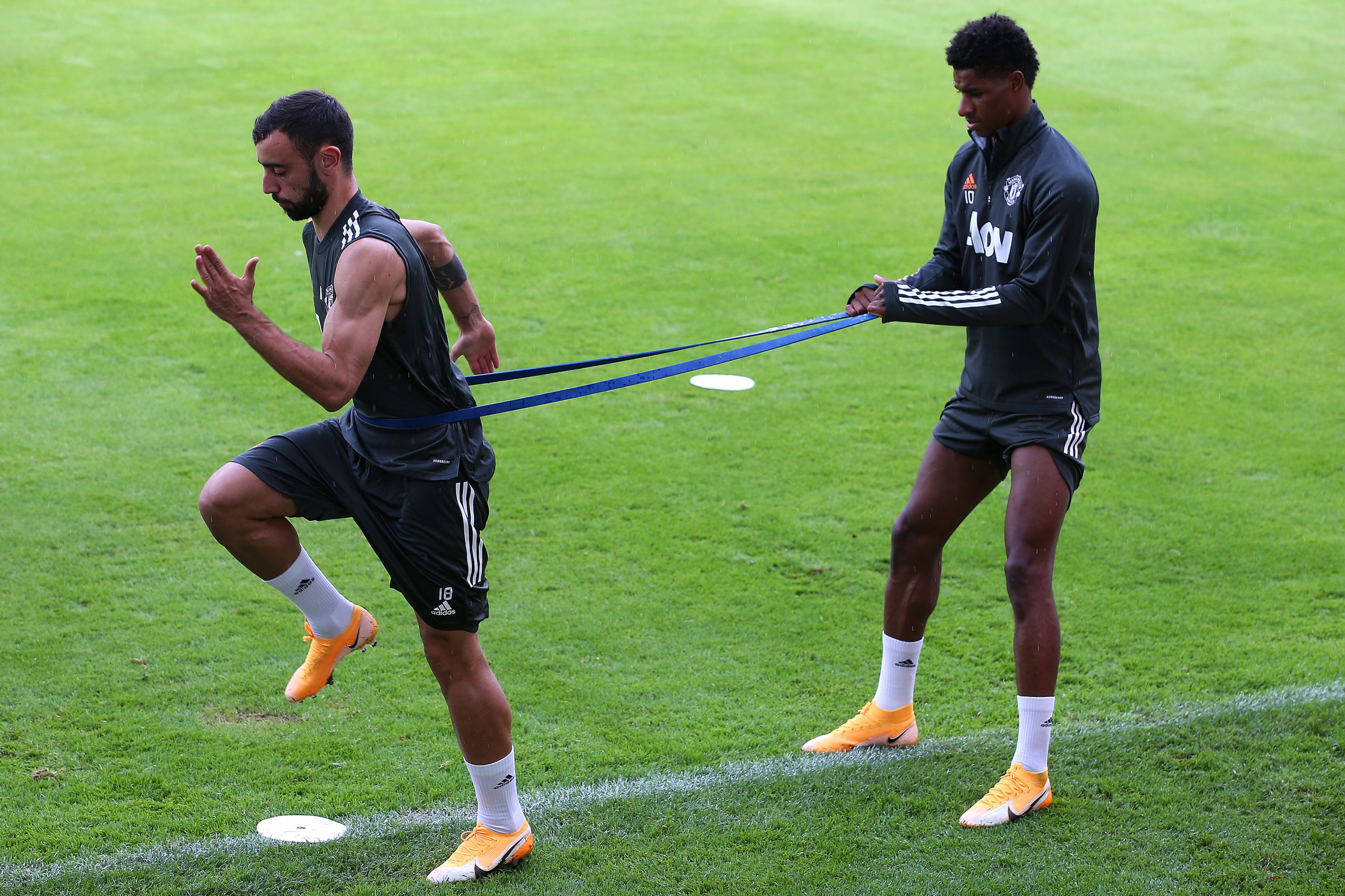 Posted at 14:37h in Research by Cian Carroll
Share

Sprinting is a key aspect in sporting performance and is highlighted as a Key Performance Indicator by many team sports.

Therefore, how do we train our athletes to sprint faster? There have been many proposed ways to train for sprinting faster but one of the most mainstream, and commonly used training methods, is resisted sprinting.

The findings of this study were supported by the finding presented by Van Den Tillaar & Von Heimburg [2] who found that resisted sprint training had a positive effect on improving unresisted sprint times by (2%).

Now that resisted sprint training is so widely accepted it is important to understand how to load the athletes we are training.

The traditional selection of resistance loads that has been proposed originally by Spinks [3] is a loading scheme that is < 10% of body mass (BM) or a 10% decrease in unresisted maximum velocity (10%velo¯).

This research has been supported by the work of Alcaraz, Palao and Elvira [4] who found that working with a resistance that allowed the athlete to reach 90% of their maximum velocity elicited positive changes in sprint performance.

Petrakos, Morin, and Egan [5] carried out a systematic review that also showed that there was a correlation between the traditional loading schemes and an increase in sprint performance.

They suggested that the traditional loading was an adequate stimulus to sprint with as it did not impact the running mechanics of the individuals being tested.

To contrast this argument, there has been a wide debate to say that heavier resistance should be used to increase sprint performance.

The study found that the heavy resisted sprint group decreased their sprint times significantly more than that of the light sled group.

The study concluded by stating they did not determine an optimal load but that the light resistance condition may be novel and that there should be more research carried out around heavier resistance to sprint with.

Cross et al [7] would support this as they have tried to determine the optimal load for heavy sled resisted sprinting.

Therefore, based on the debate above there has still been no definite clarity on which load scheme is better for resisted sprinting in team sports.

Also none of the studies above have looked into using a GPS tracking system to collect the data which may open up a real-world avenue for teams to implement these tests and training principles into their own periodised training plans.

Due to current restrictions and guidelines through the pandemic the sample size for this pilot study is novel (n=1).

The participant was male, age= 24, height= 193cm & weight = 110kg. The participant is an active, well-trained individual that undertakes training 5+ times per week.

The participant is an avid rugby player alongside completing a full body gym program 4 times per week including strength & power work.

At the time the study took place the participant was not injured and was able to complete a series of unloaded and loaded sprints of varying distance as he would in his team sport of rugby.

The loading protocol used was based off the previous literature proposed on the area of resisted sprint training.

Before the testing was undertaken the participant undertook a dynamic warm-up based off R.A.M.P protocols.

The warm-up consisted of 5 minutes jogging; 5 minutes of dynamic stretching followed by a series of plyometrics which varied from jumps to sprint technique before towing the sled.

The testing was carried out in the same place each week on the same pitch. The 3 x unloaded x 60m sprint was used from week one as the pre-intervention test, at the end of the fourth week the same test was completed to analyse post intervention to gauge if the subject’s max speed had improved.

The analysis of each session was completed using STATSports Sonra software to look specifically for increases in max speed across the intervention.

Using Sonra to perform the data analysis, the steps taken were: 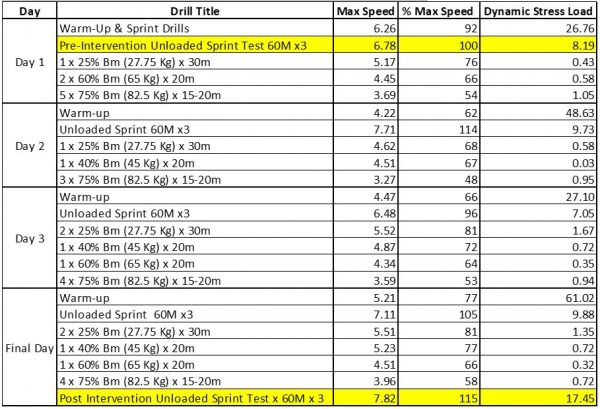 Table 1 above shows the structure of each day of testing during the study and the outputted physical variables including the Max Speed (m/s), the percentage of Max Speed and the Dynamic Stress Load (AU). 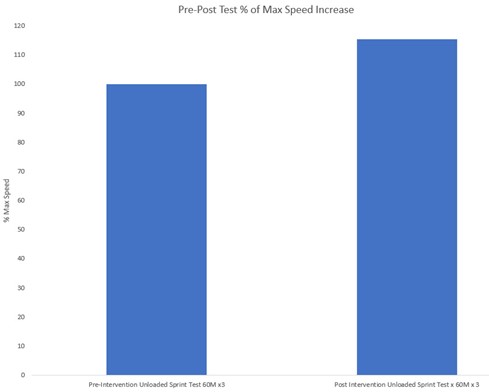 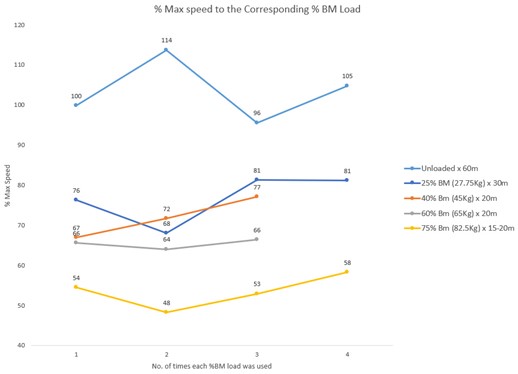 Figure 2. Line graph detailing the percentage of max speed for each time a loading protocol was used through-out the intervention.

From the study carried out, the participant appeared to increase their Max Speed from (6.78m/s – 7.82m/s) based off the pre-intervention and post-intervention testing.

These findings correlate to the results of previous literature showing that resisted sprinting with heavy sled loads is an effective training modality for increasing an athlete’s max speed.

However, with the sample size being trivial it is hard to say if these findings are reproducible. As you can see for each percentage of body mass used in the loading protocol the sprint efforts under each increasingly heavy load became slower and slower based on how fast the participant was moving.

Figure 2 provides a visual representation of the percentage of Max Speed achieved under each loading protocol described in the methods.

It is evident that as the load placed on the sled got heavier, the percentage of Max Speed declined.

There could be a multitude of reasons for the increase in Max Speed from the intervention outside of the loading protocol.

For example, the increase in speed may have been due to more proficient sprint technique leading to a smoother stride cycle which helped to generate forward force and momentum leading to a higher max speed.

The most interesting finding of the intervention is the decrease in Dynamic Stress Load seen in Table 1 as the sled load got heavier.

This is interesting as the participant found the heavier loads very tasking in comparison to the lighter loads.

This could be due to the loads being heavy and over a shorter distance and that the training adaption has come from a higher force output specifically during the acceleration phase of the sprint.

Therefore, because the participant is generating more force as they have to tow heavier sleds. This then may crossover to the unloaded efforts as you are able to produce a higher amount of force in the early to mid-stages of the acceleration phase of the sprint.

However, to know if this is the actual adaption taking place through the training cycle you would need to run on a floor made of force plates which is nearly impossible to have access to if you are an everyday practitioner.

The participant found the method of data collection using a STATSports Apex unit to be very effective as it was non-invasive and very accurate for collecting the data.

The data was very easy to analyze in Sonra and when compared with the other options of using devices that most universities only have access to it is a very practical everyday method that players, backroom staff, coaches, and clubs can utilize to give a great insight into the data collected on training and competition.