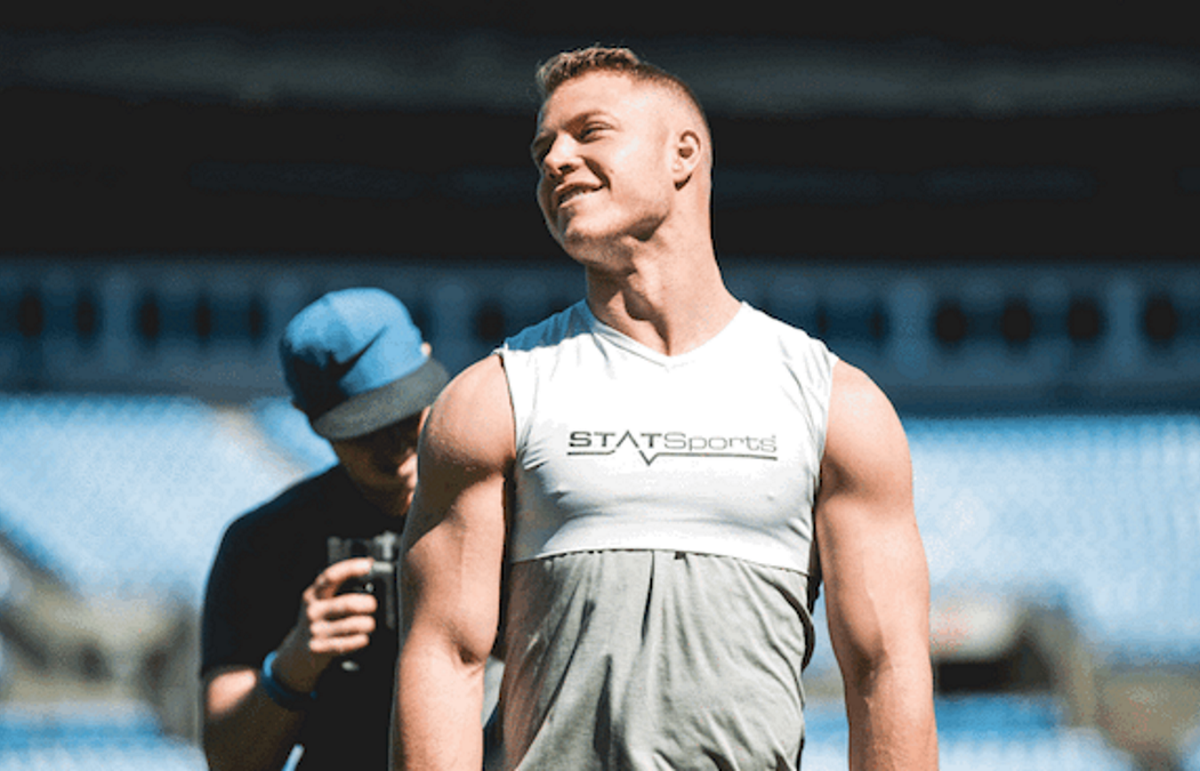 GPS wearables have become one of the more commonly used tools for accurately measuring external load.

Monitoring these loads provide a variety of objective measures that, along with subjective findings, can be used to monitor stress load, improve performance, and aid practitioners in their training load-management strategies.[i]

American Football is a field-based team sport similar in playing style to that of Australian Football and Rugby.

One major difference is each play in American Football is comprised of short-duration plays averaging around 4-7 seconds, filled with high-intensity movements and high-impact collisions followed by a stoppage in play, allowing for brief rest in-between plays.[ii]

High intensity movements are often primarily based on high-speed running and sprinting due to the high forces and energy cost required to do so.

While it is true that high-speed running places a high amount of stress on the body, even at low speeds accelerations and decelerations can be physiologically exhausting.

There are more NFL games missed due to hamstring and ACL injuries than any other injuries. With the short duration nature of each play in Football many of these accelerations and decelerations come within multiple changes of direction.

Accelerations require large amounts of energy, while decelerations place the body under high eccentric forces. As the frequency of accelerations and decelerations increase, the physiological demand on the body increases as well.[iii]

The Apex software gives practitioners the ability to quantify these movements, their intensities, and the subsequent physiological load incurred.

The Apex Desktop Software makes it possible to view all HIA’s at once. HIA’s are available by first selecting a session and then a player.

The heading will include the selected player’s name, session date, and type of session (e.g. general, matchday, etc.) The sub-heading HIGH INTENSITY ACTIVITIES quantifies the overall total number of HIA, as well as breaking each category of HIA down into total number by type (see figure 1). 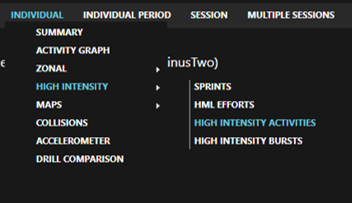 Also included in this section is the TOTAL DECELERATION LOADING which is the combined Dynamic Stress Load (DSL) of all decelerations measured in G’s or G-force.

HIA TYPE categorizes each HIA from that session into either an acceleration, deceleration, or sprint. START TIME is the time that the corresponding HIA began with END TIME being when the movement ended.

DURATION gives the length of the activity in seconds and DISTANCE which gives the distance covered during the activity (Default unit of measurement for DISTANCE is meters, configurable in EDIT>PREFERENCES>GENERAL>DISTANCES) 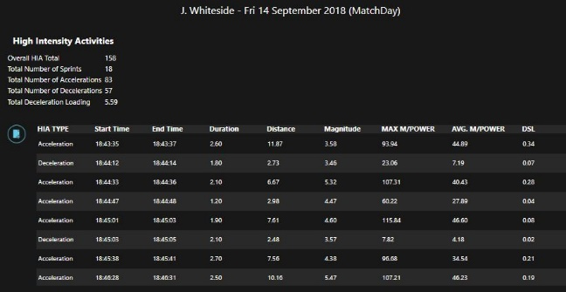 The data from the table can be copied into an excel document simply by selecting the blue COPY icon to the left of the HIGH INTENSITY ACTIVITIES table (See figure 3).

Once copied, pasting this info into an excel document allows for sorting, comparing, and contrasting HIAs at the user’s discretion.

One distinct difference between American Football and other field team sports with similar physical demands is that in the span of one play a player can cover a substantial amount of distance filled with high-intensity activities while primarily moving laterally or backwards.

The NFL combine uses drills based on position specific movements to evaluate players. For example, every defensive back drill at the combine begins with a back pedal of at least 5 yards and then rapid transition into change of direction based on the ability to react to the ball in the air.

Since it is not unlikely for a defensive player to cover more distance back pedaling and/or moving laterally than forward running it brings into consideration directional high-intensity activities (45-degree accelerations, back pedal decelerations, etc.).

25 yards sprinting forwards will have a different physiological demand on the body than a 25-yard back pedal. Although there is little research on direction specific movements using GPS it is a topic frequently mentioned amongst American Football Strength and Conditioning Coaches.