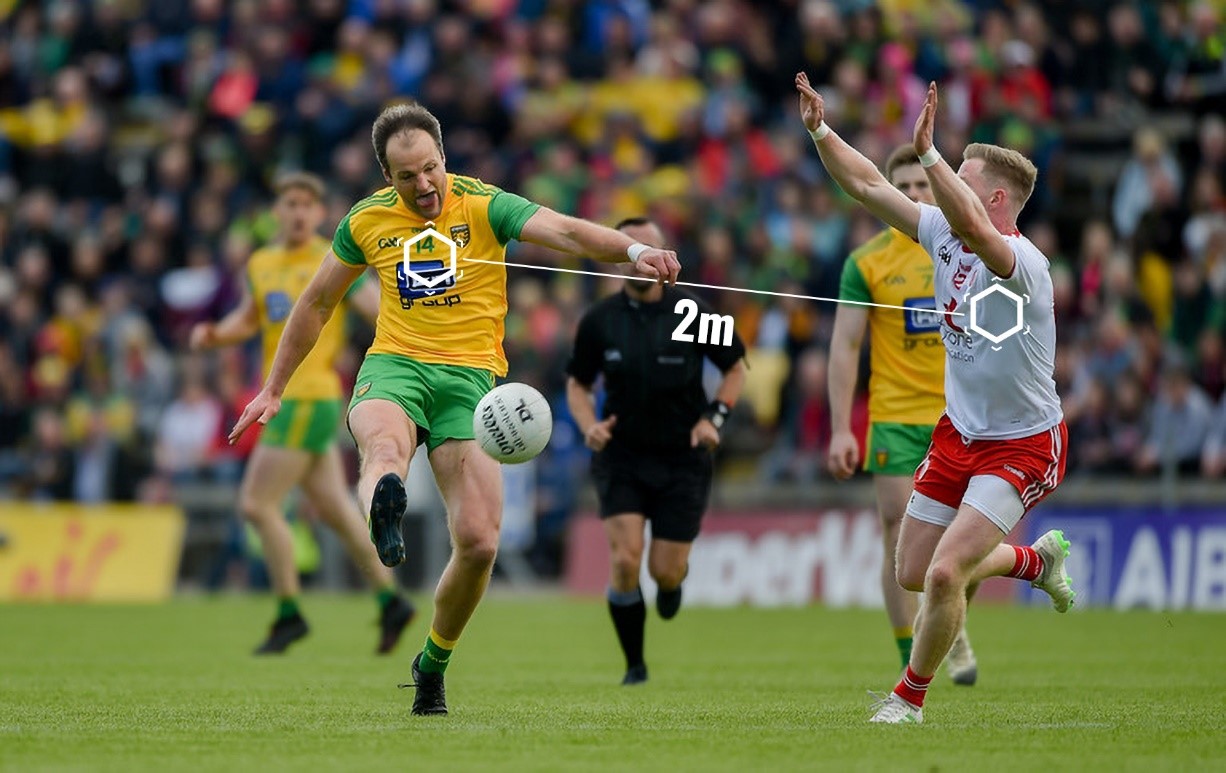 On March 12th, 2020, all Gaelic Games including football, hurling, camogie and handball were suspended due to the continued spread of COVID-19.

The pandemic’s effect has been felt across all branches of the GAA with widespread uncertainty around when or indeed if the 2020 competitions will resume inside this calendar year. Recently the Irish Government has released a plan to ease restrictions as well as reopen Irish business and society across a 5-stage process (1).

The possibility of competitive GAA action returning falls under stage 4 of the plan, which can take place from the 20th July providing no further escalations in transmission of the disease.

Questions among the GAA community currently are how safe will the players be? If social distancing continues to be common practice will the players be able to compete? Studies have shown transmission of the virus itself occurs primarily from direct human contact or via air droplets (2).

Individuals within 1 meter (roughly 3 feet) of someone who is infected are at a higher risk of transmission (3), while general social distancing guidelines indicate that individuals should make efforts to remain at least 2 meters (roughly 6 feet) from each other during the pandemic to limit transmission.

This report aims to highlight firstly the frequency of incursions inside a 2-meter radius of each player in competitive game play but also to illustrate the duration of each incursion.

The data has been taken from senior male inter-county league and championship football games which occurred prior to the emergence of Coronavirus.

The data can be used to illustrate the demands of Gaelic football from a new perspective with regards player proximity and it may also aid coaches planning of future training.

Data was obtained from 6 senior inter-county football teams for a total of 4 competitive games (provincial championship, All Ireland championship and National Football League Division 1) and 5 collective team training sessions in 2020 and 2019 prior to the outbreak of Coronavirus and any social distancing measures being implemented.

Data samples were taken from any player who featured in competitive game play, either as part of the starting team or as a substitute and from any non-injured player who participated in collective team training (N= 157).

Each player wore the STATSports Apex GNSS device inside a pocket sewn to the inside of their jerseys or inside a STATSports training vest which was situated securely between their shoulder blades.

The validity of the Apex device to quantify athlete movement at varying speeds in team sports has been demonstrated in previous research (4,5).

The data used for analysis includes first and second halves of competitive game play while it does not include any data from pre-game warmups, half time, or any movement after the final whistle.

Using raw data from the STATSports unit, which records at a frequency of 10 Hz, positional coordinates (latitude & longitude) from each player was exported to the Python Pandas software.

Using Python, a custom spatiotemporal analysis was executed to illustrate both the frequency of players encountering each other inside their 2-meter radius as well as the duration of each incursion. 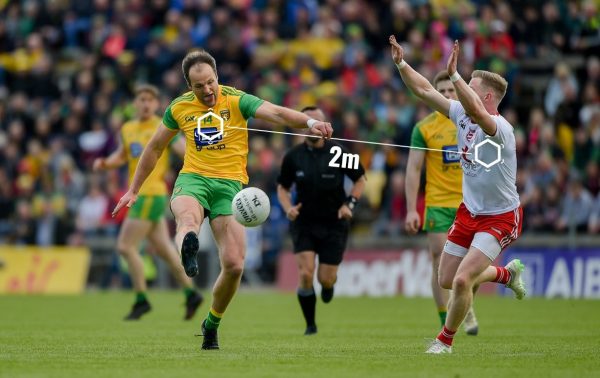 Each game observed had an average duration of 75 minutes and 5 seconds. On average each player was exposed to 539 incursions per game.

To break these results down further, on average there was a rate of 17 incursions per minute observed from each player. Data collected from these games can be seen below in table 1.

While maximum incursion rates will be viewed frequently from the risk reduction perspective, it is important to note a variance of 1,161 incursions between the highest and lowest recorded maximum values.

As stated above in the methodology, these findings are from solely game-based data across the 4 games analysed and do not take into consideration pregame, half time or post game data.

Given the nature of Gaelic Football both offensively and defensively; certain playing positions, player roles or tactical instructions may have an influence on incursion levels within competitive gameplay.

Across each game, it has been calculated that on average, each player involved will spend 24.72% of their playing time in proximity of another player.

Below in table 2 and table 3, see a player matrix illustrating the first and second half of a competitive game. This player matrix highlights the incursion frequency as well as the players who they encountered the most.

With training sessions observed showing significantly higher rates of incursion per minute than those observed in competitive gameplay, the various training drills completed inside these sessions will have significant influence on overall session incursion rates. See figure 2 for a breakdown of average incursion demands of each drill analysed.

An immediate limitation of the drill analysis shown in this report is the lack of access to all drills that may possibly be performed in training sessions from different teams.

However, the data accessible was taken, compiled and averages were found for each drill classification such as games-based drills, tactical drills, skill-based drills, and collective conditioning drills.

Drill classifications are quite simple and self-explanatory although it is important to note the criteria for games-based classification.

It is also worth noting that conditioning drills such as linear and multi-directional running were all completed collectively. See average incursion rates from these drills below in table 5.

Tactical focused drills such as kickouts show higher rates of incursions than other drills although this may also be influenced by organisational and coaching elements of tactical drills.

Players may be standing in proximity for extended periods of time while receiving instructions or feedback from coaches. Excluding the kickout drill average incursion rate of 72 incursions per minute, a range of between 4 and 27 incursions per minute was observed in all other drills.

As would be typically expected, collective team training sessions bring players in proximity of each other at a much higher frequency than observed in competitive gameplay.

The typical GAA team training session will consist of recovery activities outside of the physical training demands, such as water breaks, team huddles or taking general coaching advice.

With these recovery activities there will be prolonged periods of static or very little movement, generally in proximity of teammates.

While the frequency of incursion is significantly higher during training sessions than observed in gameplay, the number of different players who come into proximity must also be taken into consideration.

As can be seen in table 6, which illustrates a player matrix from an entire training session which had a duration of 1 hour and 10 minutes, most players come into proximity of over 90% of their teammates.

This paired with the frequency of incursion each player will experience during the session leaves the incursion rate considerable higher at training. 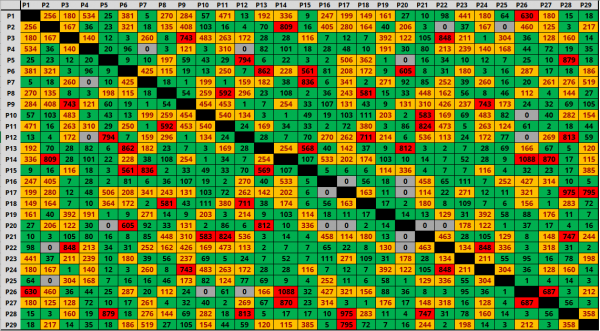 However, this training data was collected prior to the Covid-19 pandemic. With a view of returning to training perhaps collectively or in smaller groups, these sessions can be modified further to reduce the risk of player contact.

Generally, with all drills observed, the common theme seems to be ‘space is your friend’. The more space afforded to players during drills, the lower the incursion rate.

An interesting comparison observed across 2 separate training sessions among the same team. Session 1 saw the players compete in an LSG with 10 players per team inside a premeasured area of 90m x 90m while session 2 saw the same LSG with a difference of playing across a full pitch.

The maximum observed duration of incursion increased from 17.3 to 24.6 seconds within the full pitch game while both games showed an average incursion duration of 1.9 seconds.

All data is available below in table 7. This further highlights the point of using space as a key factor when planning training sessions.

Incursion frequency per player is significantly lower in games than what has been observed during collective training sessions, however it is quite easy to modify training sessions towards a more ‘Covid-Friendly’ approach.

The use of space adequately is a key factor in this, dependent on participation numbers each drill should be laid out with maximal space used rather than minimal.

From a conditioning point of view, alteration of game-based dimensions has been used in the past to chase a desired stimulus such as high-speed running distance, accelerations, and decelerations (6).

These stimuli can be chased through making the game dimensions narrow or extremely vast, in this instance the dimensions should be edging more towards the vast side.

Players will spend on average, 24.72% of their game time in proximity of at least one other player. Generally due to the ‘man-marking’ approach adopted by a lot of teams.

We know that if the ratio of open space to the amount of participant per team is in favour of space, there will be significantly lower rates of incursion each minute.

As seen above in table 7, a large sided game with adequate space will result in less incursions by each player. Many of the drills which may be deemed a ‘higher risk’ can also be modified by using the space and controlling participants.

Team warmups are generally performed in a condensed space on the field prior to the training session taking place.

From this report they show a rate of 23 incursions per minute, although this can be easily reduced if the warmup area is maximized in size.

Along with modifying drills to reduce incursion frequency, protocols should also be in place around delivering coaching points while limiting prolonged periods of player proximity, around water breaks including no sharing water bottles and adequate space and also recovery periods during conditioning work, appropriate measures should be in place to ensure players are not recovering between sets in close proximity to each other.

A limitation of this study must be noted, the fact that all data from games is taken solely from the game itself and all training data is from the beginning to end of the training session on the pitch.

Typically, there have been large levels of interaction pre and post games / sessions due to crowded changing rooms and at times media commitments.

These aspects must all be taken into consideration and ultimately modified towards a Covid-friendly approach.

Overall, this data shows us the current rate of incursion a player will be subjected to in both competitive games as well as collective training.

It will provide a strong reference point in the effort to modify scenarios at training and indeed around game days to ensure the players can play the game while their welfare is also prioritized.