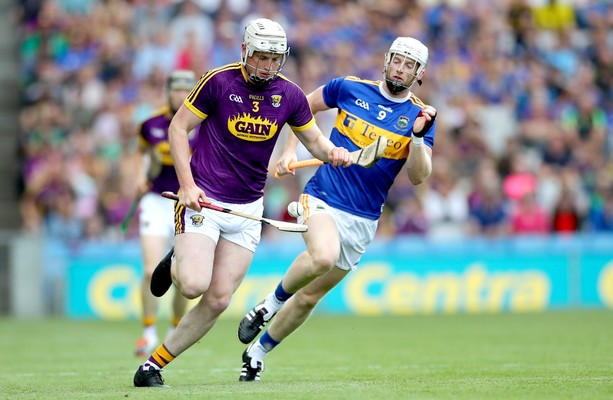 Posted at 15:36h in GAA, Research by STATSports
Share

The rise of GPS technology in elite sport over the last decade has been enormous. Reflecting on the last 10 years and more, in an era when only the world’s sporting giants pioneered the use of GPS, to the present day where there is not a single team in the top 4 tiers of English football not using some form of athlete monitoring system.

In Ireland, a similar pattern has started to emerge in recent times with many sports including the GAA starting to embrace GPS technology as the awareness and understanding around the sight of a GPS unit in the back of the county jersey has grown.

This rapid growth in the use of player tracking technology from the top down in the GAA looks set to continue as products are developed with club teams and players in mind.

No longer is GPS a foreign, unattainable concept for progressive amateur teams but a real, valuable tool which can be used to drive competition, performance and overall development of players and coaches alike.

In this article, I am going to concentrate on looking at the benefits of the Apex Coach Series platform for hurling and Gaelic football clubs up and down the country as well as touching on some of its brand-new key features.

The Apex Coach Series product was developed with amateur teams in mind when it came to meshing some of our own current metrics and features with an easy to use, clear and concise app which would give coaches instantaneous feedback without any time-consuming downloading or analysis steps.

The Coach Series platform itself is built with our tried and trusted Athlete Series units as its backbone, with sessions being automatically synced back to a master Coach Series app.

The number of players on a team with one of these units is the only limitation to the amount of data a coach will have access to. 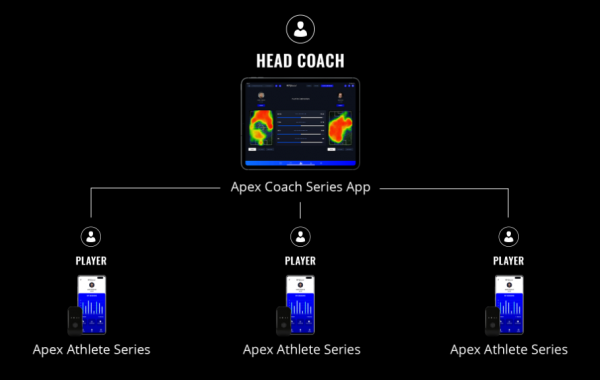 With the Athlete Series phone app and the Coach Series tablet app offering a wide range of metrics and analysis tools, each player and club are sure to utilise the data captured in different ways.

However, below, I will outline some of the key features and benefits players and coaches can avail of from introducing this system both in the short-term and over an extended number of years.

In the GAA world, we have all seen poorly laid out spreadsheets and group messages from coaches and managers outlining the loose plan for the next few weeks as well as the inevitable last-minute alterations.

With the Coach Series app, members of management have the opportunity to add as many squad sessions and games to a custom-built calendar as they like throughout the pre-season, league and championship phases.

This is in addition to adding in any sessions prescribed to individuals or smaller groups to be completed away from the group setting (highly applicable at the moment of course). 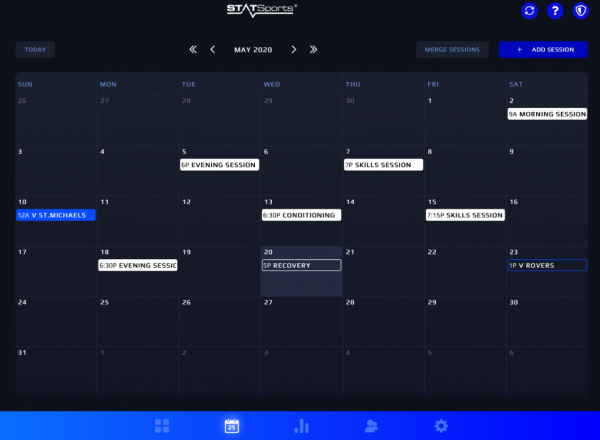 The calendar also gives you the ability as a coach to add notes to sessions and games as well as logging the opposition, venue, score etc. for games throughout the season.

This logging feature is of significance as it gives coaches the opportunity to look back on previous results against certain opposition teams or on certain pitches to give a snapshot of the physical output associated with those particular conditions when planning for similar games.

As the roles of fitness and S&C coaches have evolved exponentially in club GAA in recent years so has the dreaded battery of testing that looms large after the winter break and often mid-season to track the progression of the squad over time.

Clubs renting out speed gates and spending time setting up courses for 6-minute runs or 1km time trials or their equivalent is a common theme.

A player simply wearing their Apex Athlete Series unit during a testing session will save a lot of time and effort for coaches when it comes to set-up and  also, the frantic scribbling down of times for each player on the clipboard.

The first and most obvious thing the coach will be able to see post-session (without any analysis or tinkering with spreadsheets) is each player’s max speed.

This output might be attained from a standardised 40m sprint or in a more game-specific training drill designed to elicit top-end speeds.

Both will provide an objective marker of a player’s speed profile in relation to their peak velocity. This speed can then be retested using the same method to check for any fluctuations over time.

A coach can also look at distances covered in the session on their interactive app to get a more accurate look at each player’s performance in the aerobic tests compared to the average. 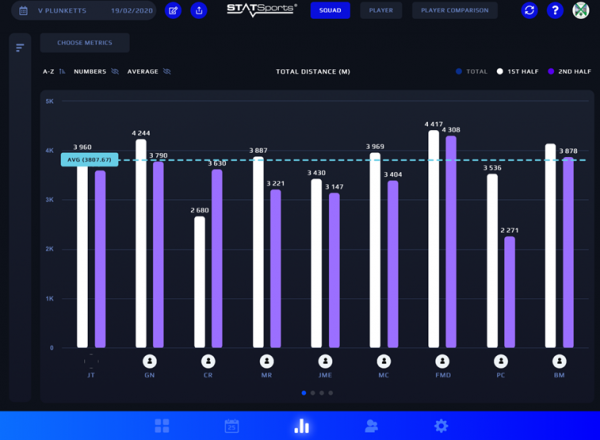 Following on from all the pre-season testing, the first thing coaches and players alike will be keen to examine is the individual and collective output of the team on game day, whether it be a challenge game, a league game or a full-blooded GAA Championship day.

Analysing and understanding the physical output in game scenarios is amongst the most important aspects when it comes to utilising GPS as it gives you the chance to get a real feel for a player’s capabilities as well as a chance to appreciate what you are preparing a team for during periods of training. 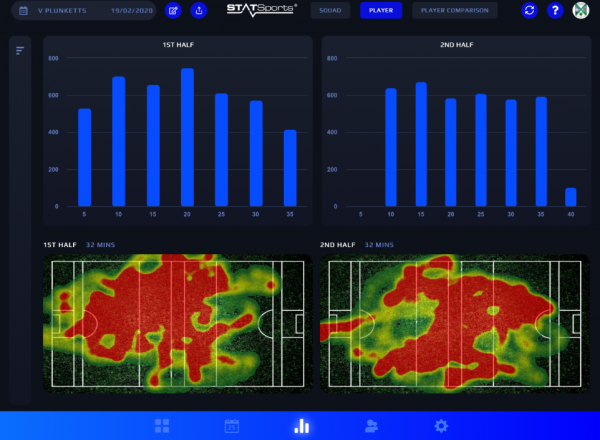 With the Coach Series system, the data at the fingertips of the management team post-game can be interpreted and used in countless ways.

The key use that stands out to me personally is the ability to track an individual player’s progress over a season, from the first challenge game in the rain in January to the first round of the championship and beyond.

With this data, you can compare a player’s output in different positions as well as in different roles, depending on opposition, conditions, etc.

This may be particularly important when looking at a young player for the first time and assessing whether they can physically carry out the role you have in mind for them when compared with a more experienced player.

With any player, but particularly with young players, monitoring their progression is fundamental to long-term athletic development.

The data collected over a player’s career can provide invaluable insights to training and game demands for future generations of aspiring hurlers and footballers. 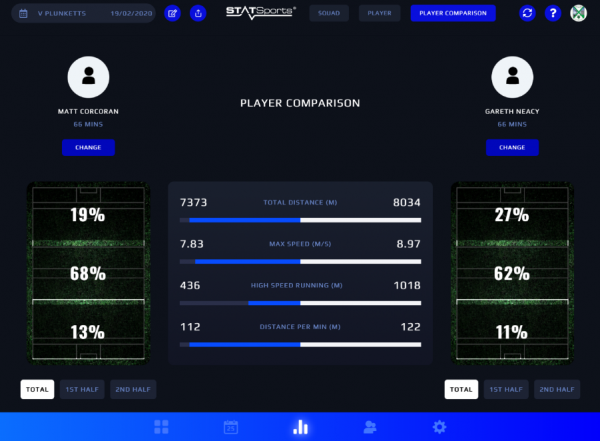 When it comes to preparing correctly for important games and protecting against injuries, the GAA has come a long way in recent times with over-training and burnout being big talking points especially relating to young players.

The case of the player being part of a number of teams at once, however, is still commonplace, with talented young players often expected to line out with underage teams, adult teams, inter-county development teams as well as participating in other sports alongside the GAA season.

This makes it more difficult for coaches to ensure their athletes are not over-trained or to a lesser extent, under-trained leading into critical periods of a season.

With the Apex Athlete Series unit being a constant in a player’s gear bag, it gives coaches from all teams that a player is involved in a comprehensive view of the player’s load for the weeks leading up to competitive games.

As this becomes the norm, coaches and players will be able to regulate workloads and put in place proper recovery and tapering strategies to ensure optimum performance and to reduce the incidence of burnout and the associated injury risk.

A key consideration when it comes to analysing data in the GAA is that it is not all about the numbers in terms of who has the most high-speed running metres or who is working at the highest intensity.

With the skills of the game, tactics and positioning still being so pivotal in both codes to this day, concentrating all our attention on the data and the physical output of a player may be counter-intuitive.

The Coach Series platform gives the user license to go beyond the numbers and delve deeper into the analysis of games and training sessions with the technical analysis tools.

These tools include heat maps and zonal breakdowns which gives coach and player a view of where each individual player spent the most time on the pitch e.g. analysing a midfield player to see what percentage of time they spent in the attacking third and how much time they spent tracking back to their defensive third.

The sprints tool is also a useful tactical feature in which you can pinpoint where a player’s sprints occurred.

This may be handy when looking at a defender and what percentage of his sprints occurred driving forward on attack and conversely, what amount happened when tracking back facing their own goal.

These features give context to a coach on a player’s positional sense and tactical knowledge without having to use any camera tracking systems etc. 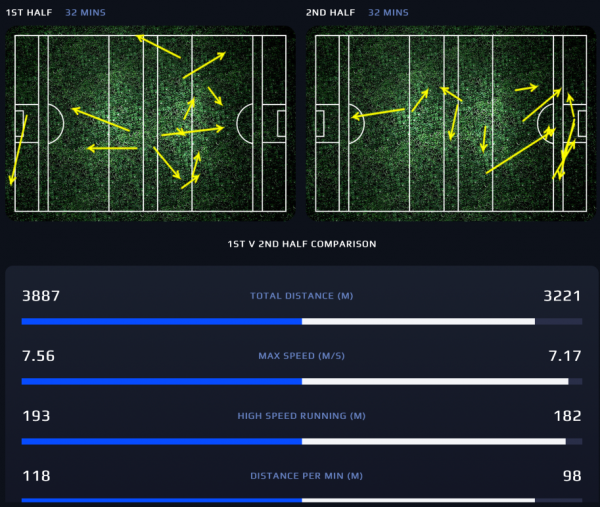 In conclusion, I feel that the use of GPS tracking in professional sport and the benefits associated with it is on the verge of becoming commonplace in amateur sport.

The spike in amateur athletes tracking steps, calories, etc. while exercising using smartwatches and phone apps is an indicator of the appetite for physical data amongst the general population nowadays.

The Athlete Series GPS unit alongside the Coach Series platform was built with the likes of GAA club teams, specifically in mind.

Its positive effect on the development and continued buy-in and enjoyment of coaches and players in the future will hopefully be widespread and help in a small way to continue the unyielding impact of the GAA on so many across the country.

If you are a GAA or S&C coach who wants to improve your team’s performance and prevent injuries, you can get in touch with Apex Coach Series specialist and Sport Scientist, Connor Clancy at [email protected] or contact him on +447443461658.

If you are an individual player who wants the same world leading technology that is used by All Ireland football champions Dublin and All Ireland Hurling champions, Tipperary, you can purchase Apex Athlete Series.