In team sports (Association Football) the ability to perform movements at high speeds, such as being first to the ball or moving away from an opponent  can often determine critical match outcomes. With straight line sprinting being the most common action taken before a goal scoring action [1]. Sprinting speed is therefore an important attribute for participating successfully in the sport. Sprinting performance in football can be divided into two phases: an initial acceleration in the first 5 to 20m and the maximal sprinting speed likely reached after 20 to 40m [2]. By assessing maximal sprinting speed, practitioners are able to determine the efficacy of training programs and allows for player’s physical attributes to be profiled [3]. Max speed speed assessment can also be used in conjunction with other fitness attributes to create individualised speed thresholds/zones for external load monitoring [4,5]. Therefore, the ability to accurately measure a player’s maximal sprinting speed can be paramount in the planning, delivery and evaluation of competition and training loads, in an attempt to optimise the training process and to the manage the risk of injury [6].

Max Speed (MS) has been typically assed in a field context using either laser/guns or infrared timing gates. This method of assessment can however provide certain  barriers to the practitioner, such as the availability of testing equipment, scheduling during congested in-season programs, and a perceived high risk of injury by players and coaches.

However, in recent years with evolution and development of Global Positioning System (GPS) technology, practitioners now  have the ability to receive live speed and distance data of multiple players at one time during matches and training sessions. In fact research has shown that MS determined by 10Hz GPS has nearly perfect correlations to that of MS determined by a radar gun and timing gates [7,8]. With this technology available,  practitioners have the capability to attain MS accurately during training and/or matches, as well as sprint speed assessment during maximal sprint tests.

In accordance with current literature the most common MS assessment test for football players is the performance of 3 maximal 40 m sprints, with a set recovery time between efforts [Figure 1]. Using timing gates practitioners will record split times at 10, 20, 30 and 40m, MS would then be determined from the player’s fastest 10m split [3].

However, by utilising STATSports Apex units, practitioners now have the ability to obtain a player’s MS during maximal speed tests without the need for timing gates or the calculation of fastest split times for each individual player. Simply by measuring a 40m sprint for players to run, while wearing the Apex unit the practitioner is able to attain the MS of the 40m sprint for each player. The data can be monitored in real time using the Apex Live Application and/or downloaded to the Apex software.

When downloaded the user will have access to each player’s speed trace using the activity graph feature. Drills can be created or transferred over from the Apex Live Application which allows the split of each individual sprint. The user can then instantly identify MS for each player/sprint from the data shown in the drill editor tool [Figure 2]. If more than one player has ran the 40m sprint at one time, drills can be applied to save the user time whilst running the assessment but also with analysing data post download.

With the recent developments in GPS technology, STATSports Apex allows the user the ability to access MS using match and training data. By utilising satellite-based augmentation systems (SBAS) along with its own unique MAPPS technology, Apex allows accurate and reliable positioning data to be recorded in challenging GPS conditions which some stadium environments can produce.

Using this technology practitioners are now able to obtain a player’s MS accurately over a series of matches/training sessions for multiple players simultaneously, without the need for individual speed testing. Nonetheless, research has indicated the highest MS attained over the course of 14 matches were faster than those achieved during the 40m sprint assessment [10]. This questions the utility of sprint assessments for MS in football, which is already considered as a burden to coaches and players given time constraints and the perceived risk of injury.

By tracking players in multiple matches/training sessions, the STATSports software allows the user to easily identify any changes to MS over the course of a extended period of time. The Analyse Data For New Max Speed feature will prompt the user when a new MS has been recorded [Figure 3]. This allows the option to apply the new MS of the player, which will in turn update the player’s profile and speed zones to match (based on % of MS). 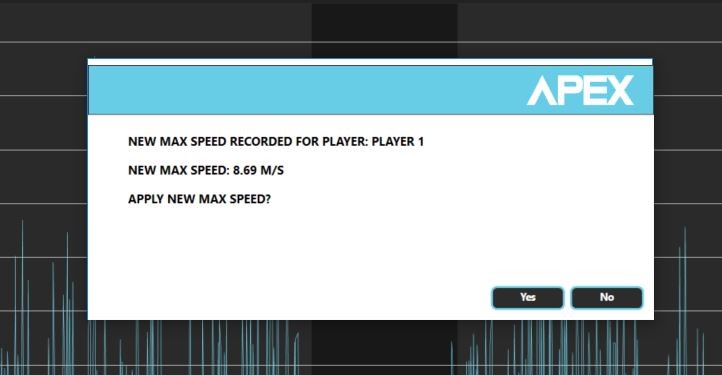 Global Positioning Systems (GPS) have allowed an alternative way for practitioners to obtain Max Speed (MS) for football players, without being dependent on timing gates and the calculation of fastest split times. Using the technology allows the ability to analyse MS in multiple matches and/or training sessions  simultaneously, whilst still allowing  practitioners the option of specific maximal sprint testing.

However, with research highlighting that over a series of matches MS is higher to that achieved during a 40m sprint assessment, it suggests that maximal sprint testing may be an unnecessary determination of MS in football players. It is acknowledged that maximal sprint testing is still used by some practitioners for determining the acceleration capabilities of players. It is however, important to understand the need for MS assessments in football and the benefits of having this information can have with each individual player depending on their age and playing position.

With straight line sprinting being the most common action taken before a goal is scored in football, it is imperative that coaches incorporate training drills to achieve speeds near a player’s MS, alongside other specific drills that allow for the development of  maximal sprinting speed.

With football players using a greater percentage of their MS in matches, they are more likely to experience higher muscle load, which may lead to an increased risk of injury during sprinting. Therefore by utilising specific training techniques to develop maximal sprinting speed (resistance training) based on the profile of the player (age, position, MS), coaches can lower the hamstring relative load during matches and possibly prevent injuries from occurring [2].

Finally, when assessing MS it is important to consider which method of testing is best for all parties involved. Time constraints, reliability of testing equipment and the increased risk of injury to the player should all be considered by the practitioner.