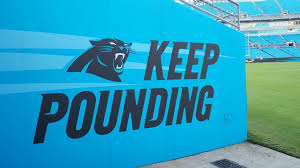 Posted at 15:37h in American Football by Chris
Share

Our sports scientist Kevin Lawless gives a behind the scenes look at the Carolina Panthers pre-season using STATSports Viper.

It’s the last week of July and a record 49,000 fans have turned out to attend STATSports clients the Carolina Panthers training camp in Wofford College, Spartanburg, SC. The slogan #BackToFootball is posted around the practice fields as fans eagerly await the return of the Panthers star Quarterback Cam Newton from injury. It is also the first time fans will get the chance to see the highly rated wide receiver Kelvin Benjamin, recently drafted from National Champions, Florida State University.

With less than five weeks to go before the start of the regular season,Head of Strength & Conditioning at the Panthers, Joe Kenn, closely monitors the player’s loads throughout each session using the STATSports Live Streaming feature. The coach can observe key performance metrics such as: 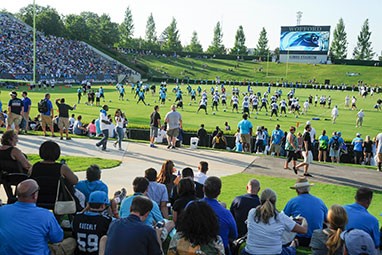 This feature allows for real-time decisions during each practice session, such as limiting the amount of reps a player has per period. I was approached by the wide receivers on a daily basis inquiring who had achieved the highest speed in each session – a little friendly competition never hurts!

The use of GPS analysis in the NFL is becoming more widespread and considering 2013 was dubbed the ‘Year of the Injury’, it is easy to see why. The Viper sports performance software includes features such as the ‘Fingerprint Drill’ which allows coaches and rehabilitation specialists to track the progress of an injured player returning back to full fitness.

Through the use of the Smart Threshold System, the coaches can also monitor if the players have exceeded the expected measures during a live session or later, post download. This information allows the coaches to rest players or apply alternative recovery methods specific to each player.

Since our pre-season visit to Charlotte, Carolina had a fantastic start to the season having opened their campaign with a 20 – 14 win over Tampa Bay, The Panthers followed that up with a 24-7 win over the Detroit Lions before losing two games to Pittsburgh and Baltimore in weeks 3 and 4. But the team made amends for those two defeats with an excellent come-from-behind win at home to Chicago.

They will continue to use STATSports Viper System to ensure that all players are performing at maximum each week and reaching their peak on game day. The STATSports Viper Pods will be an imperative monitoring tool, collecting data and highlighting optimum outputs for each individual player for the remainder of the season. All the data collected from the players throughout this season will be then used to compare and shape sessions for next season.

On a personal note, I remain in regular contact with the Panthers coaches, helping them utilize the STATSports software to its maximum potential in order to keep them winning on the field. Believe it or not, I have also became a big Panthers fan.