STATSports Coded Drills: Insights into the Contextualisation of the Physical Demands of Match-Play

23 Jul STATSports Coded Drills: Insights into the Contextualisation of the Physical Demands of Match-Play

Posted at 14:06h in Research by Cian Carroll
Share

The physical demands of soccer match-play have been reported using time-motion analysis techniques as far back as 1976 [1].

In the following years, a wealth of literature has been published describing physical demands in soccer using more sophisticated techniques (such as GPS and optical tracking).

Despite the abundance of literature, few of these studies offer much insight into the influence of team tactics on physical performance.  Physical output during match-play is governed by tactical roles/restrictions [2], and as such, tactical variables should be considered when analysing match data to understand the physical load in a match-specific context.

From a research perspective, this form of match analysis offers an intuitive and more detailed understanding of physical match data, while it could also be utilised in a high-performance setting to design drills around the game demands from a physical and tactical perspective. 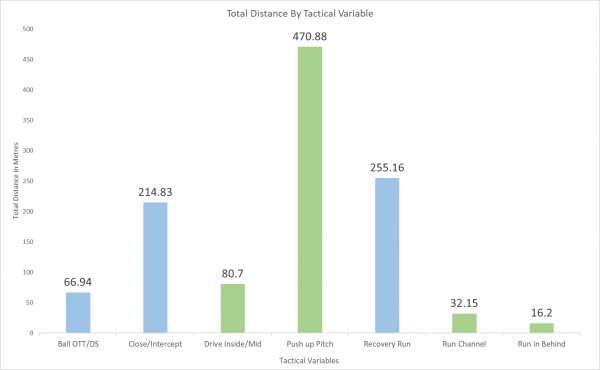 Though a more contextualised approach to match analysis appears to be the logical ‘next step’ in player tracking, the limitations of current techniques should be considered before adopting this method.

As noted by Bradley and Ade [4], evidence of practical viability is necessary before implementing such techniques.  Tactical data with the accompanying physical metrics are difficult for researchers to obtain.  As such, there has been limited research demonstrating this process.

Ade et al [5] demonstrates a novel approach to coding and reporting the high intensity efforts during match-play in elite soccer, with the aim to develop drills specific to match scenarios.  The video coded tactical data used in conjunction with physical outputs allows for the creation of training drills which reflect game demands in relation to the physical, tactical and technical variables.

The difficulty in producing this information lies in the coding process, as the coding and labelling of individual player movements is an arduous and time-consuming task.

As there are currently no automated technologies to perform this type of tactical coding, Figure 1 offers a simple breakdown of physical work performed according to tactical variables.

This data could then be applied by a practitioner to implement a training design which could achieve the desired physical load while performing specific tactical tasks. 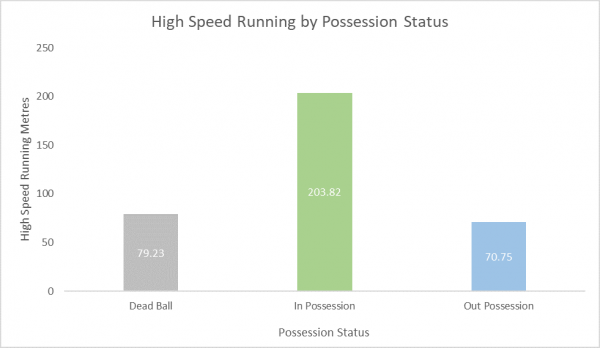 The Coded Drills feature of the STATSports Sonra software can be used to easily import timestamps from video analysis platforms, or even those generated manually, via a simple .CSV import.

This allows the user to create drills for the time-coded activity, hence allowing for the physical data to be reported in the context of the coded actions.

For demonstration, a code window was generated within a video analysis platform (Sportscode) and possession status was coded, in addition to field location of one midfield player.

Once coding was completed, a .CSV timecode log was exported from Sportscode and imported into the STATSports Sonra software.

The data was then ready to be reported in accordance with the tactical codes.  Figure 2 illustrates the High Speed Running (>5.5m/s) covered by an attacking midfield player in a 45 minute half.

Understanding the tactical purpose of physical work in games could be highly beneficial in the design of appropriate training drills, particularly in return-to-play scenarios where the objective is to ensure the athlete is prepared to perform at match intensity.

This could be further developed by including counts of technical skills (such as passes and dribbles) to be performed within these phases.

It is worth noting that the coding of tactical runs performed is a time-consuming process and may not be feasible to perform for every player following games in a high-performance setting.

Instead, it may be more appropriate to choose a match to analyse in this level of detail, which the practitioner believes to be the athlete’s optimal performance.

Possession status is typically readily available for elite teams or easily coded, it may provide the most practical method of contextualising the physical data during match days.

While it may not offer the detail of the ‘integrated’ model, it may still hold value to practitioners.  Physical metrics by possession status could potentially be used as a performance indicator, for example a team employing a high-press strategy may seek a minimum running intensity while out of ball possession.

Furthermore, with the collection of a large data sample, it may also be possible to use possession status to estimate physical load for upcoming fixtures based on opposition playing style and allow physical preparation coaches to structure the athlete’s training exposure accordingly.